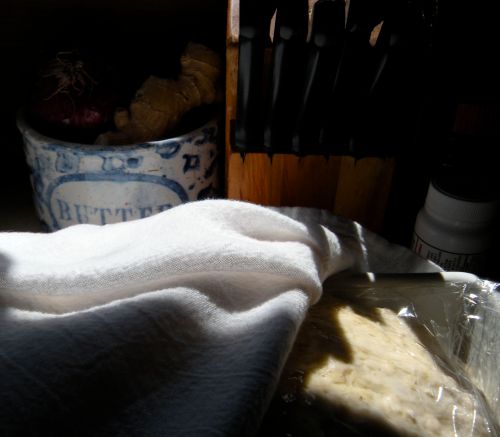 I don’t remember how I came upon this bread recipe because it’s a standard King Arthur flour recipe but I tried it out a couple of days ago and it was, hands down, the best loaf of bread I have ever tasted! And that’s saying a lot. I used to drive two towns over to Concord to buy some cracked wheat bread that was my favorite bread up to now. This oatmeal bread has a thicker crumb, is moist and toasts beautifully too–crispy on the edges and chewy on the inside. I like to eat it with unsalted Kate’s butter, drizzled with some Billy Bee honey that can be found at the local Stop and Shop (both the butter and the honey.)

If you want to fall in love with your kitchen, your house and have everyone in your family on their knees, try making this bread! It only takes about three and a half hours to make from start to finish, there’s very little kneading involved–in fact, I think that heavy kneading would just make it tougher. So this morning, around 9 a.m. I started the dough for my second loaf.

Then, I got an email from my seventeen year old granddaughter who said the bread sounded delicious and could she have the recipe? So here’s the step by step instructions I wrote out for her!

It’s the King Arthur Oatmeal Bread recipe–which you can probably download also. But here’s what I do that is slightly different and easier to follow I think!

Warm 1 1/4 cups of WHOLE milk in the microwave until it is warm to the touch of your finger but not hotter than that.
Put in 1 packet of Fleischmann’s dry yeast–the FAST RISING KIND.
Stir the yeast in the warm milk until dissolved
Take half a stick of unsalted butter and nuke it until it is soft but not melted–you can also leave a half stick in the sun on the counter before you start too. Use the paper to butter the loaf pan later on.
Put the soft butter into the yeast/milk mixture.
Add 3 Tablespoons of honey –I use Billy Bee brand from Canada that you can get at the Stop and Shop, but not at Shaw’s (it’s the BEST TASTING HONEY!!)
Add a teaspoon and a half of salt

Take a mixer and mix all of the ingredients above together until it is smooth.

Then gradually add 3 cups of King Arthur flour and 1 cup of Quaker instant oatmeal–you may have to stop the mixer and scrape the beaters and add the rest of the flour and oatmeal by hand. Put some flour on your clean hands and start kneading the dough until the flour and oatmeal is all mixed in. If it’s sticky, add a little bit more flour until you have a dough that doesn’t stick to your hands. But don’t put on too much flour–just enough so the dough isn’t sticky.

Knead it a little bit more until it’s a smooth ball. Just a few minutes and shape the dough into a ball.

Spray a clean mixing bowl with Pam. Settle the bread dough in it to rise, spray a piece of plastic wrap and put it sprayed side down on the dough and cover with a clean dishtowel. Set it on the kitchen counter (okay in light sun) and let it rise for about an hour and twenty minutes. When it has risen,

Knead the dough a little more but not a lot–and go easy on it so it doesn’t get tough–I do only about 5 minutes and I push the dough really gently.

Then butter your loaf pan or bread pan (I use a Le Creuset white porcelain bread pan that I just got on Amazon.com)–make sure it’s really clean and dry and butter all the corners. Then pat the bread dough into an oblong that will fit nicely into the bread pan, a little higher in the middle than the sides.

Then cover with the plastic wrap again and the clean dishtowel and let it rise again until the bread is about an inch above the top of the pan–about another hour or so.

Preheat the oven to 350 degrees. When it’s preheated, gently put your bread pan into the oven and turn on the oven light so you can watch it bake without opening the oven door.

Bake for about 35-40 minutes and if the top looks like it’s getting too brown, open the oven about 5-10 minutes from the end and cover with aluminum foil. I was going to do this but the foil kept falling off and I didn’t want to burn myself so I didn’t do it.

Be sure to bake it for that long or the bread won’t be cooked through.

fresh baked in the oven

Your kitchen should be smelling like HEAVEN ON EARTH by this time!!!!!

Then slather with unsalted butter and drizzle with a little honey.

I’ll bet you could eat the whole loaf with a friend at one sitting–really good toasted later too.

Then, you’ll wish you had made TWO loaves–although I think it’s better just to make one loaf at a time. It’s SO YUMMY!!

warm bread on the table!

So that’s today’s post about making homemade oatmeal bread with a few photos to document this delicious entity.

Just also wanted to note that I’ve been pretty conscious of avoiding wheat these days, but I don’t think a little bit of it in this form will kill me.