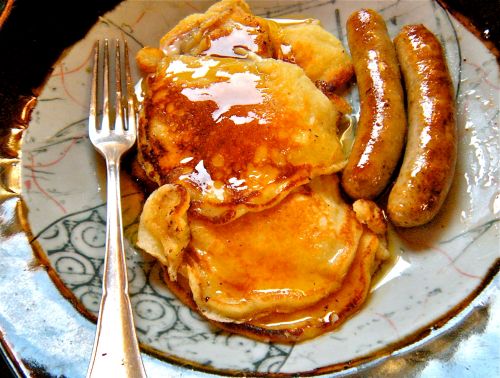 Today’s Sunday breakfast: I’ve been wanting to try Ruth Reichl’s pancake recipe since her cookbook arrived last week and today seemed like a good to make them. But I used fresh buttermilk instead of milk as called for in her ingredients. Here’s Ruth’s recipe, a landslide favorite at Gourmet Magazine:

Melt 1 stick unsalted butter in skillet that you’re going to cook the pancakes in;
Whisk together 1 cup buttermilk (or milk), 2 organic large eggs & 1 tablespoon vegetable oil; then add butter to mixture;
Add 1 cup flour, 4 teaspoons of baking powder (without aluminum) and 4 teaspoons of sugar (scant) plus a pinch of salt.

Mix together by hand and cook the pancakes in the skillet that was used to melt the butter. Heat up some Jones country sausages in another pan until golden brown. Serve with butter, pure maple syrup and cups of hot coffee.

Enjoyed while reading the Sunday New York Times with my husband on a peaceful, sunny Sunday morning. Doesn’t get any better than this!

a new classic in cookery writing . . . 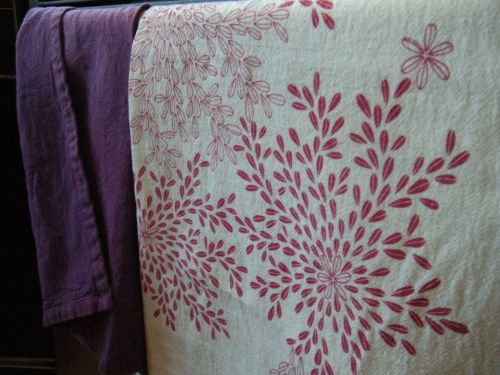 “Ruth Reichl – My Kitchen Year” is a wonderful book that also happens to be a cookbook that I can cook from every day. As a memoir of her days after Gourmet magazine abruptly closed, it’s easy to understand how she returned to the kitchen to assuage her grief during a time of uncertainty. Be that as it may, this book contains handwritten chapter headings with poignant photographs of the countryside throughout the seasons surrounding her home in New York state along with recipes that are classic and easy to follow. There are no foodie stylists around, just one photographer who takes the picture, then joins in eating the goods. This book is intimate in its charm and fresh with recipes that are classic updated with contemporary touches.

I happen to cook a lot and to also cook dishes that are similar to the ones that Ruth Reichl celebrates here. . . although she manages to insert special little touches that I hadn’t thought of before. For example, combining chopped shallots and onions to finest grated cheddar cheese before making a grilled sourdough cheese sandwich. Or, her best fried chicken brined in salt, then soaked in buttermilk and ONION before frying in coconut oil and butter.

Above and beyond the visual and culinary treats that this book offers, it also contains anecdotes that are poignant to Ruth Reichl – one of a woman offering to treat her to a sandwich while she’s waiting in an airport after the sudden demise of Gourmet magazine. Or the memory evoked during a fried chicken picnic at Tanglewood of a youthful trip to Israel, forced on her by her parents where she met another young woman who happened to be Carole King – who, along with James Taylor and Yo Yo Ma, provided the program for that Tanglewood fried-chicken picnic evening.

This all makes me feel that Ruth Reichl has lived a blessed life despite the very public humiliation of the closing of her Gourmet magazine after ten years as its editor. She’s married to Michael who is 75 who happily eats her blinis with sour cream and salmon roe in her videos, she also has a son whom she adores. Best of all, she’s moved from New York City to a low slung contemporary house in New York State that was built overlooking beautiful countryside with nearby farms and other provisioners of vegetables, cheeses and other organic goodies.

It almost seems like the whole demise-cum-survival scenario was “meant to be” as the next chapters of her and her family’s life. She just didn’t know it at the time.

I’ve always liked Ruth Reichl through years of reading cookery magazines and cookbooks. The graphics of those Gourmet magazines under her stewardship were unbelievably rich and beautiful if you might recall. I’ve saved all my copies of Gourmet from those times because they were such a feast for the eyes as well as for the kitchen. And with these few rainy days, I’m looking forward to pulling them out and looking at them once again.

In this book, I am particularly looking forward to trying her New York cheesecake recipe with the chocolate wafer crust and sour cream glaze, and other homey recipes like shirred eggs with pureed potatoes for supper with a simple green salad.

Finally, she makes a big deal out of making turkey stock for gravy at Thanksgiving – and she’s absolutely right that no matter how the roasted bird turns out, the stuffing and the mashed potatoes, with a deeply rich “made from scratch” turkey gravy, everybody will love whatever is on their plate. Not that Ruth Reichl’s “other” offerings would be anything other than tasty and tender.

I’ve reached a time when I shouldn’t be buying any more cookbooks. My cookery library started with Elizabeth David’s Penguin editions and expanded through the years with books by M.F.K. Fisher, Julia Child, Alice Waters, the River Cafe, Nigel Slater, the Conrans, Thomas Keller, Noma and Judy Rodgers. (We celebrated Christmas Eve with Judy Rodgers’ roast chicken and bread salad two years ago when she died at the age of 57 a few weeks before Christmas. It was out of this world and memorably delicious! – see photo on right) 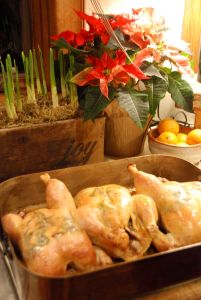 Still, I think that this new volume by Ruth Reichl will now be my favorite and will be a standby to look through for new things to try and to tweak classic recipes I’ve already made many times. It is a beautiful volume on so many levels.

In an interview published by the New York Times last week, Ruth Reichl was quoted as saying “You should have as much fun as you can because you don’t know what’s coming down the road.” Well, it looks like she not only survived what she didn’t see coming down the road, but with this memoir/cookbook, she’s also managed to illustrate how she’s landed on her feet, built a new home and produced what I think will become a true classic in the ever mushrooming world of cooking.

Postscript: since this post was written, I’ve tried out Ruth Reichl’s pancake recipe. The only change I made was to use buttermilk instead of whole milk. They are truly the best pancakes I’ve ever had – delectably tender in the middle and slightly crispy on the edges. You might think pancakes are easy to make (and they are) but this recipe is head and shoulders (and different) from any others that I’ve tried.

Am also looking forward to roasting filet of beef sprinkled with truffle salt and eaten at room temperature with leftovers for sandwiches the next day! 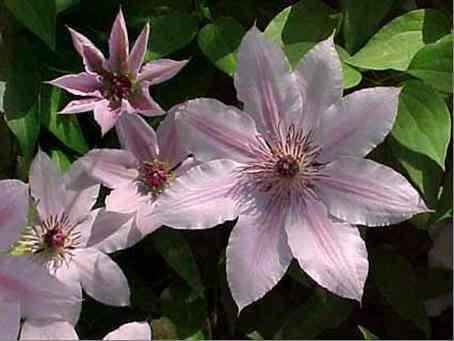 This morning at breakfast, I read a quotation to live by from Ruth Reichl, cook and former head of Gourmet Magazine:

“At this point in your life,” she said, “you have to have as much fun in life as you can because you don’t know what’s coming down the road.”

She is 67 and her husband, Michael Singer, is 75. They live in a vast glass house they built eleven years ago in New York State. More can be found at this link: