“get well” flowers from my daughters and granddaughters . . .

Well, my horoscope indicated that 2014 would/should be a quiet year for me even though it’s the Year of the Horse and that’s my sign. Both Western and Eastern signs I read about in January indicated that I should “take a back seat” kind of approach for the year. At first, I was kind of nonplussed and mystified. Now, I am beginning to understand what might have been behind those predictions.

On Thursday evening, as I prepared to drive down to a meeting at City Hall for a Citizens Advisory Committee of which I’m on the board, I mistook where I was on the stairs going down, thinking the next step was the floor. It was not. I was up higher and I fell, landing on my right ankle with a loud cracking sound. I was afraid to look at my ankle because I thought maybe the break in the bone might be visible on the outside. It was not, but the swelling became elephantine.

G. took me to the Emergency Room, where they took one look at the ankle and hustled me through the various processors who have to look at you before someone orders an X-Ray. Then, the shaking of heads by all the nurses who said, “hm, lots of breaks.” Not a good sign. They moved me to the larger emergency room pod and got me into a room where two orthopedic residents set about realigning the tibia which had dislocated from my ankle socket. They were kind, gentle and amazingly competent. They kept asking me if I was in pain, and one of them said I was the most stoical patient he’s ever had.

Wearing lead aprons, they used a portable X-ray machine that showed them my ankle while they put it back together using the x-ray photos as a guide. Under lidocaine anesthetic injected into my ankle area and an IV painkiller, they worked on it awhile, looked at it, then decided they needed to cut the cast they had just put on to realign it better. After that, they sent me to radiology to have X-Rays taken again. On the computer back in the room, I was shown the X-Rays of the injury “before” and “after.” An amazing difference! One of the orthopedic residents was the spitting image of Christian Slater, I thought, although he said nobody had ever told him that before. I chatted on about how “Bed of Roses” with Christian Slater and Mary Stuart Masterson was one of my favorite movies –which he hadn’t seen. It also turned out when he told me his last name, that his father was the cardiologist that my mother-in-law goes to (she’s ninety-five and the sweetest words he says to her at her checkups is “see you in six months!”)

Anyhow, I got home around 1:30 in the morning and after awkwardly pulling myself up three flights of stairs to where we live, we were ready for bed. The cast weighed a lot and I hadn’t gotten around to getting the painkiller medication partly because I don’t have prescription insurance (no one could believe that I didn’t take ANY medications and that I wasn’t twenty years younger–very flattering and did wonders for me while my adrenalin was pumping along overtime in the ER. The prescription turned out not to cost $80 as I had imagined, but actually cost just over $11.00. That was a good sign, I thought.

My daughter, M. flew down from Minneapolis the next night and spent the weekend with us. She helped us find a medical supply place and came home with arm cuff crutches and other supplies that helped a lot. For our dinner, she made lasagna with zucchini and fresh spinach, layered with brown rice, whole wheat lasagna noodles, sauce, ricotta and parmesan cheese. We had it again for supper last night. My granddaughter, A. and I were going to have lunch together on Saturday prior to my accident and she drove down instead and we had a nice lunch visit together with M. (I had made homemade wontons with pork and shrimp in a napa cabbage and spinach soup broth.)

On Sunday, G. and I went to have a CAT scan of my ankle so that the orthopedic surgeon would be able to look at it before my visit with him for a consultation this morning: whether I will need to have surgery or not (probably yes) and what the recovery process and prognosis might be.

All in all, I feel that it could have been a lot worse for me: I could have broken my hip, injured my spine or neck, fallen on my head with greater injury and more dire consequences. Our cup is still more than half full and we will get through this by streamlining our needs and being patient with each other during this highly impactive timeframe. My daughter, C., sent me a link for free grocery delivery from our local Stop and Shop which we might try out. And after we learn what’s in front of us today, we’ll know better what to expect. More later . . .

Later: G. and I had a good visit with the orthopedic surgeon. He agreed with me that the two orthopedic residents had done a “fabulous job” putting my bones back together in the ER Thursday night, so that my foot could heal sufficiently before having surgery. He’ll take off my cast this Friday to examine how the bones are holding together (or not!) and right now, he said surgery might take place next Wednesday. After the surgery, a weekly checkup, then removing the sutures, then recovery casts for a period of about six weeks. This sounded a lot easier than what I had read about online (12 weeks or up to a year!) so I’m really encouraged about possibly having a shorter recovery time required after surgery. And it’s also good to know that the surgery will take place next week.

Back home again, G. and I managed to get me up the 29-30 stairs that bring me up to the third floor where we live. The stairs are original to our Queen Ann Victorian house, built in 1899 and are made of curly cherry wood; there are four landings that separate the rows of stairs. Each time we navigate them, we get better at it.

After a lunch of bologna sandwiches (Boar’s Head!), potato chips and drinks later, I’m now resting on the leather couch in front of the TV, my cast leg slightly cramping from the exertion of getting up the stairs.

So, that’s it for now. This break (in my ankle and in our lives) has taught us how much we mean to each other, how fortunate we are to be together and that really. . .  truly. . .  honestly . . . , it’s not worth sweating the small stuff. . . and in the context of things, almost everything is small. 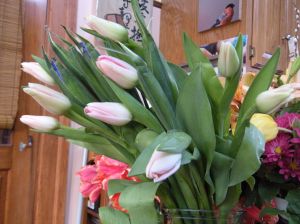