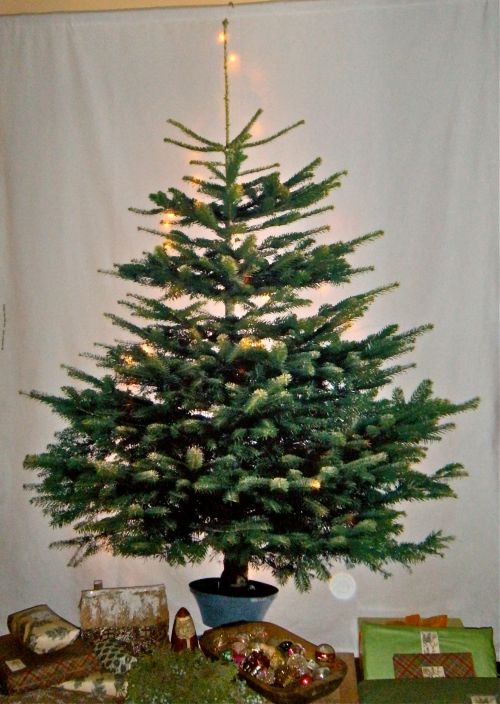 Christmas is very special for us every year and the tree has been the centerpiece of our family’s celebrations for decades. We have had a fresh Christmas tree, bought for so many years at the Follen Church tree sale in Lexington while the girls were growing up. One year, we woke up to find that M. (when she was a teenager) had strung some string around it and tied the end to a doorknob to hold the tilting tree up after she got home late from babysitting one year.

It was fun over the years to add new assortments of hand-crafted or antique mercury ornaments. The whole enterprise of the Christmas tree grew like topsy so that incrementally, it became a big deal, year after year. Our second floor hall closet is dedicated primarily to Christmas tree associated things: decorations, lights and all the extras all carefully sorted and labeled every year after the holidays.

The tree was decorated in a process that included layering a series of decorations after the strings of small white lights were set in place on the tree. Then:

These Christmas trees over the years were indeed something to behold! And it required a lot of effort and time to put them up and then to take them down after the holidays. (The worst was always looking for the Christmas tree stand before the tree could be brought in the house!) You could imagine how many different boxes things had to go in; the lights wound together in one, the tiniest “best” ornaments in another. And so on and so on. . .  One year, we even brought all the decorations up to the cottage on the Atlantic that we rented for the winter. That year, I found a $12 dollar tree at the lumber yard in Gloucester that was perky and sweet, the shape of which reminds me uncannily of the one in the header photo above.

I love Christmas because the season is full of ideas, surprises and humorous presents that we hope will get a big laugh or exclamation of joy when they are opened on the 25th every year. For awhile now, I’ve been trying to figure out a way to simplify this Christmas tree tradition so that more time could be spent on having fun and less on sorting, unpacking and then repacking what was beginning to feel like a ritual obligation rather than a loving tradition.

So, this year, we did something completely different. After the holidays last year while browsing through “Elle Decoration” a UK magazine that I enjoy, I came upon a photograph of a Swedish home with a huge wall hanging of a natural Christmas tree. It was printed by IKEA and was six feet long and five feet wide. I couldn’t believe my eyes! For one thing, the tree was the exact kind of natural tree that it is futile to find anymore unless you go out and cut your own (which I would never do given the waste of all those trees already cut in Canada in early November that never make it to someone’s home.) It was beautifully, irregularly proportioned with a very tall spike of branch at the top and sides that hadn’t been trimmed with an electric saw to make it look completely symmetrical to please the buying public.

After Thanksgiving this year, I somehow remembered that IKEA wall hanging and decided to transform our idea of a Christmas tree this year. When it arrived, I was impressed by the weight of the fabric and how finely it was woven. It was printed in Sweden with the maker’s name woven into the selvedge of the fabric. The fabric was cut very close to the tree design on the top and the bottom so instead of folding it over to hem for a hanging sleeve, I sewed on wide facing that I stitched by hand on the underside on both ends to preserve as much white border visually as possible.

Then came the mechanical engineering part of hanging it over the large mirror opposite the piano in the alcove where we usually put the tree. G. constructed a piece of corner shaped molding to attach it to and then hang it from the wall on the left side. On the other end which extended beyond the wall, he rigged up a holder to slip the rod through where it could rest securely.

We hung it up and both of us loved how it looked!

There was a slight twinge of regret that there wouldn’t be a live tree this year. I found some boughs of pine at the farmers market and set it in a white enamel bucket nearby to give off some fragrance. And although I loved smelling the trees for sale there, the thought of putting it up and what that effort would have entailed reinforced my desire to do something new that would still be wonderful this year – and that we could enjoy for years to come.

We left the hanging alone for about a week and moved a rosewood coffee table underneath it to give the appearance that the tree was set on top of the table. I experimented with some spot lighting but while it lit the front of the tree, it appeared rather flat. For a couple of days, we played around with setting up a string of lights in front of it but it looked awkward rather than enhancing the effect.

Then yesterday, G. came upstairs with a couple of graduated size thin strips of wood that he had cut notches into the ends. He set the double string of lights on a top ring hook and then we taped each strand of lights on the notches in descending widths the same shape as the tree branches on the wall hanging. He then moved the whole contraption behind the hanging and hung it from the center of the rod. As we turned the lights on for the first time and the lights twinkled as though they were on the tree and rather than lit from behind, a magic wand from the Universe waved and our modern Christmas tree sparkled. 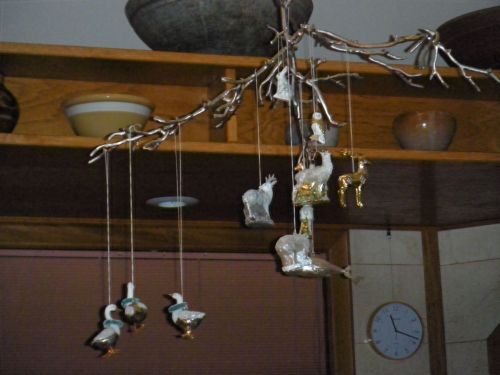 It’s gratifying to feel that we don’t have to “give things up” as time goes on . . . and that we can enhance our lives in ways we hadn’t thought of before! And this year, the “Merry Christmas” ornament is nestled with other ornaments in a cherry burl bowl on our kitchen table. 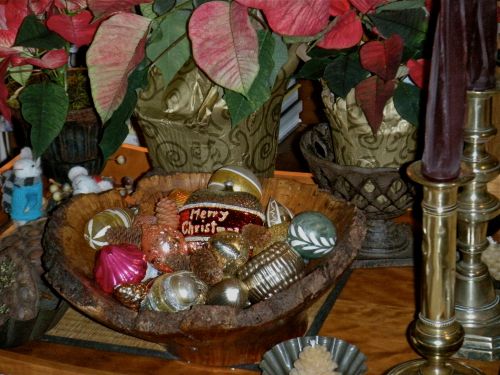