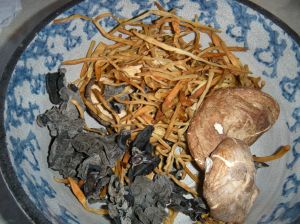 It’s unusual for me to be running around as much as I have this week because I’m usually quiet, staying put, reading, knitting, and so on as you can see from my blog. This week, though, I happened to have not one, but appointments to see TWO doctors, a City board meeting and a bunch of conference calls. So, today, now that I’m thankful and relieved to know that there’s nothing seriously wrong with me that ice packs, some drugs and ointment won’t heal, I’ve decided today will be a day of rest.

Many of you also know that when I take a quiet day or a day of rest, that it usually involves doing some cooking to relax. I’ve gotten into the mode of having a rice pot of sticky rice going most of the time. And if I make batches of other dishes that keep well in the fridge, then we have a few days where I can really take days of rest and do virtually nothing for us to eat really well for a few days running.

Since I visited my 92-year old relative a few weeks ago, and learning that she passed away on Wednesday morning of this week,

I’ve been wanting to make a dish called Buddha’s Delight, which she made for me a few years ago when I visited her after the big ice storm here in New England. Now, I want to caution you that HER version of Buddha’s Delight, served on old wooden plates, is not anything like what you might find on a Chinese restaurant menu, NOR in many Chinese cookbooks. I know because I’ve looked at them and they don’t resonate with my memory of what she made that day. Apparently, there are many variations of what goes into this dish (weird things like broccoli florets, carrots, snow peas, canned water chestnuts, etc.) It also turns out that this vegetarian dish is traditional for Chinese New Year (which has already gone by in January.)

But, I do remember the rather austere dish that she had made when we got together in her kitchen where the old brick patterned linoleum floor matched the one that I also had in my old Lexington house when the kids were young. The table was simply set, with wooden plates to eat the Buddha’s Delight with old bamboo chopsticks. That was all.

Here’s what I recall: a fragrant sauteed dish containing finely shredded cabbage (regular, not napa which is what the majority of recipes call for); tiger lily buds, black tree ear, cellophane noodles, dried shitake mushrooms, fresh bamboo shoots, the whole thing aromatically seasoned with green onions, ginger, good soy, mirin, a little sugar and sesame oil at the end to give it fragrance. So, that’s what I’m going to make today. 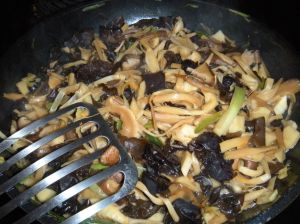 Buddha’s Delight on the stove

For dessert, I went for some fragrant strawberries that were $2.99 for 16 ounces of fruit. It’s not really in season yet and I don’t usually buy them, but I thought they would be tasty, trimmed, cut up and macerated in fresh Meyer lemon juice and sugar ahead of time. Then later, a little fresh cream poured over the strawberry melange to eat for dessert. We’ve discovered that the cream thickens quite a bit when stirred with the lemon. G. took half a dozen large berries next door to his 94-year old mother and his brother, both of whom he reported had smiles on their faces when they saw these beauties.

strawberries in Meyer lemon and a little sugar

So, that’s my idea for a day of rest. We’ll be able to eat the Buddha’s delight for a couple of days; I reheated the leftover roast duckling in the rice cooker which had almost finished steaming the new batch of sticky rice. Tomorrow, I’m planning to slice up a small white radish with greens, sprinkle fresh sea salt on it, rinse and dry it, then add some Japanese Marukan seasoned vinegar to slightly pickle it and serve with freshly washed and dried watercress after the stems have been removed. The radish-watercress salad will be a nice accompaniment for cool slices of drunken chicken dipped in an oyster sauce mix, with leftover Buddha’s Delight and sticky rice. The leftovers overlap and hopefully the flavors will mingle and complement each other.

Okay, that’s enough for now about food and cooking.

Photo postcript: Here’s a photo of our dinner tonight (Sunday)! Poached chicken legs, marinated in cooking sherry (Drunken chicken) and chilled. A white radish salad (this was great!) marinated in Marukan vinegar, a little sugar, soy, chinese black vinegar, scallions. The radish slices were crunchy and delicious; the cold chicken which I cut off the bone (since I don’t have a meat cleaver) and dipped in oyster sauce, organic soy, a little sugar, a drop or two of spring water. There was leftover Buddha’s Delight (just a little left); and Char sui roasted pork which we dipped into our ramen noodle broth with baby spinach. It was a tasty meal after another hard day of slogging through paperwork. Getting there, though. 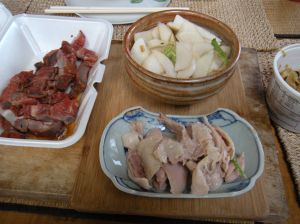